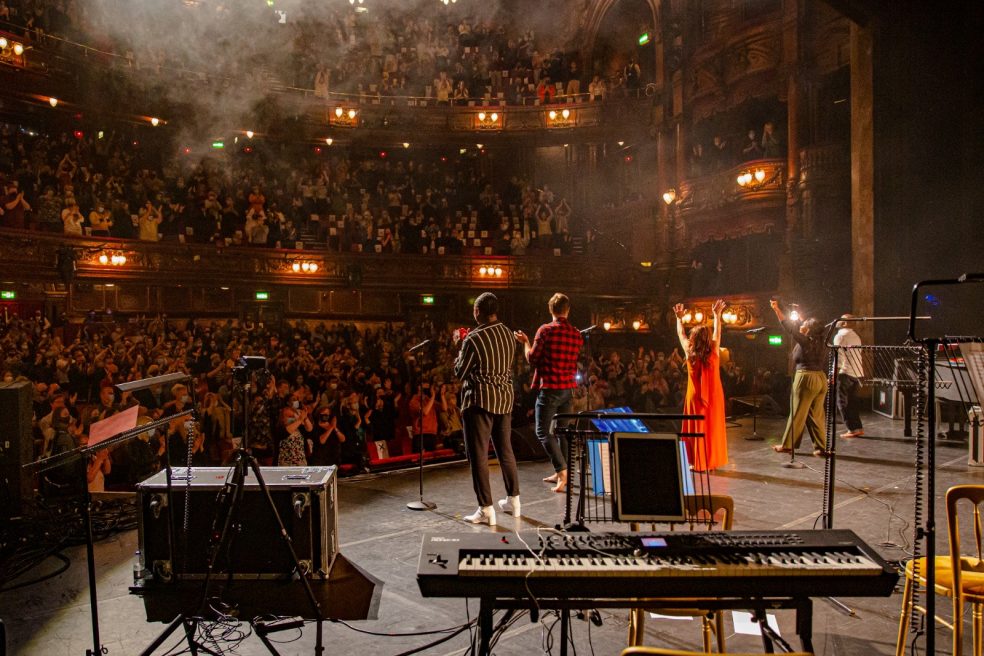 AMI Article: The future of theatre: Inside the reopening of the London Palladium for ‘Songs For A New World’ 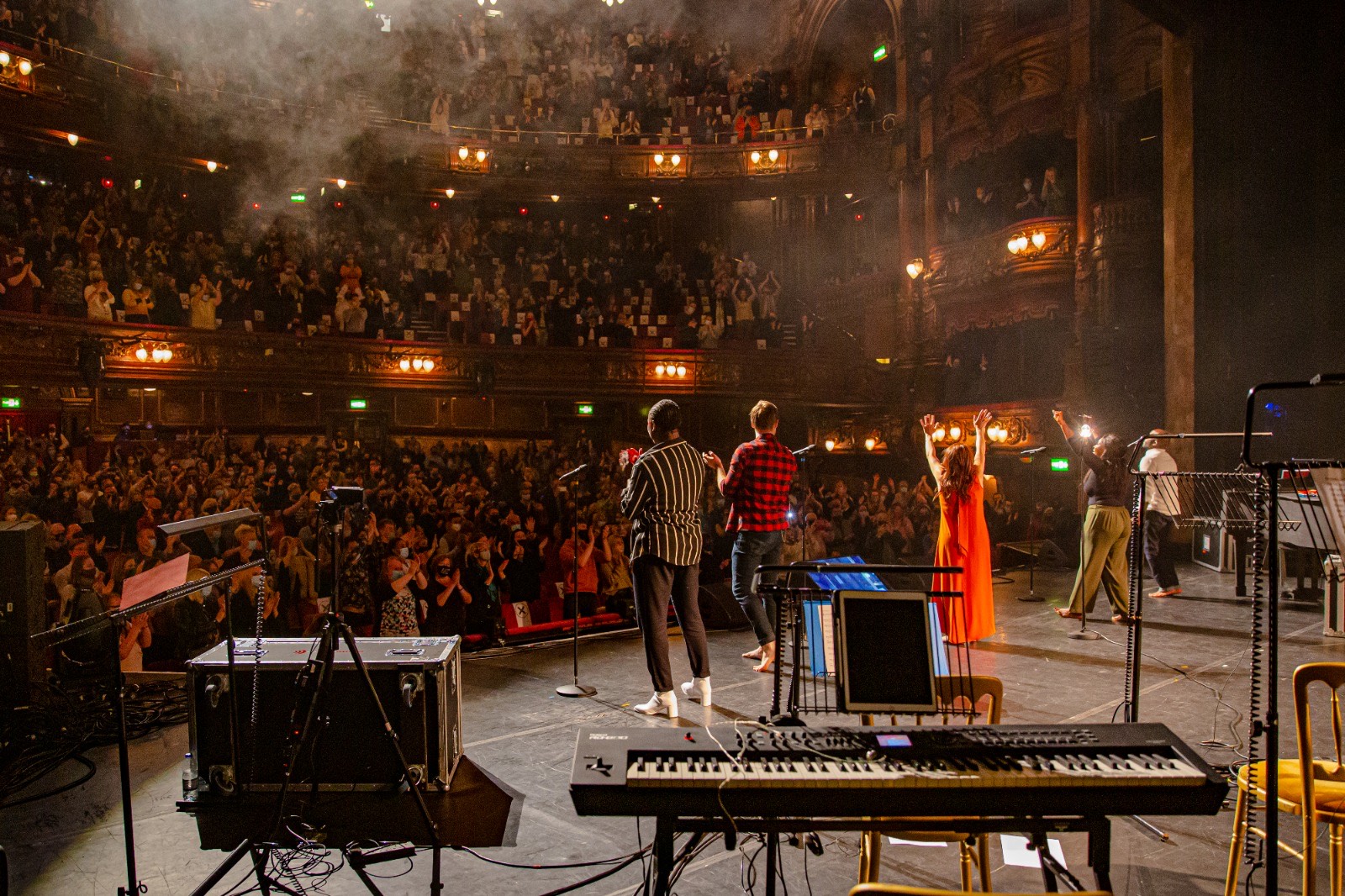 On October 11, the London Palladium opened its doors for a socially distant staging of the fittingly titled Songs For A New World. Audio Media International finds out how the show fared from an audience and an audio perspective from events production specialist Robins Audio and discusses what the production could mean for the future of theatre as we know it…

When the London Palladium opened for the first socially distant production to grace its storied boards earlier this month it could hardly have been for a more fittingly titled show. On October 11, Songs For A New World, a piece of musical theatre written and composed by Jason Robert Brown in 1995, played to a sold out – but not packed – house, as the legendary London venue treated an audience of 1,000 not only to a much needed evening of entertainment, but also offered a glimpse of what a night out in the west end may look like for the foreseeable future.

Ever since theatres and venues of all shapes and sizes were forced to close at the onset of lockdown back in March, the devastating impact of the COVID-19 pandemic on the live events industry has been well documented. Venues and businesses have been forced to close – some temporarily, some permanently – and thousands of jobs have befallen a similar fate. In many cases, it’s been a question not of when live events will return, but if. In the case of theatre specifically, this question remains particularly pertinent.

Unlike music concerts or stand-up comedy, where the focus on social distancing is generally on the audience, theatrical shows must contend with the not insignificant matter of keeping the performers a safe distance from one another, as well as those watching. Especially in the case of big song and dance musical productions. Quite how these types of show will be able to return is very much unknown, but the Palladium’s staging of Songs For A New World certainly provided a look at what is possible under existing restrictions.

A Lambert Jackson production, this iteration of the show featured five lead performers who remained socially distant at all times, backed by six musicians and, at one point, a chorus of six drama students – a hugely impressive feat under the circumstances. Yet despite the logistical and technical accomplishments on display, so much of the event’s success was dependent on the audience – not only in their ability to adhere to social distancing guidelines, but also in their ability to shrug off the distractions of what is ultimately a rather distorted environment and immerse themselves in the spectacle. 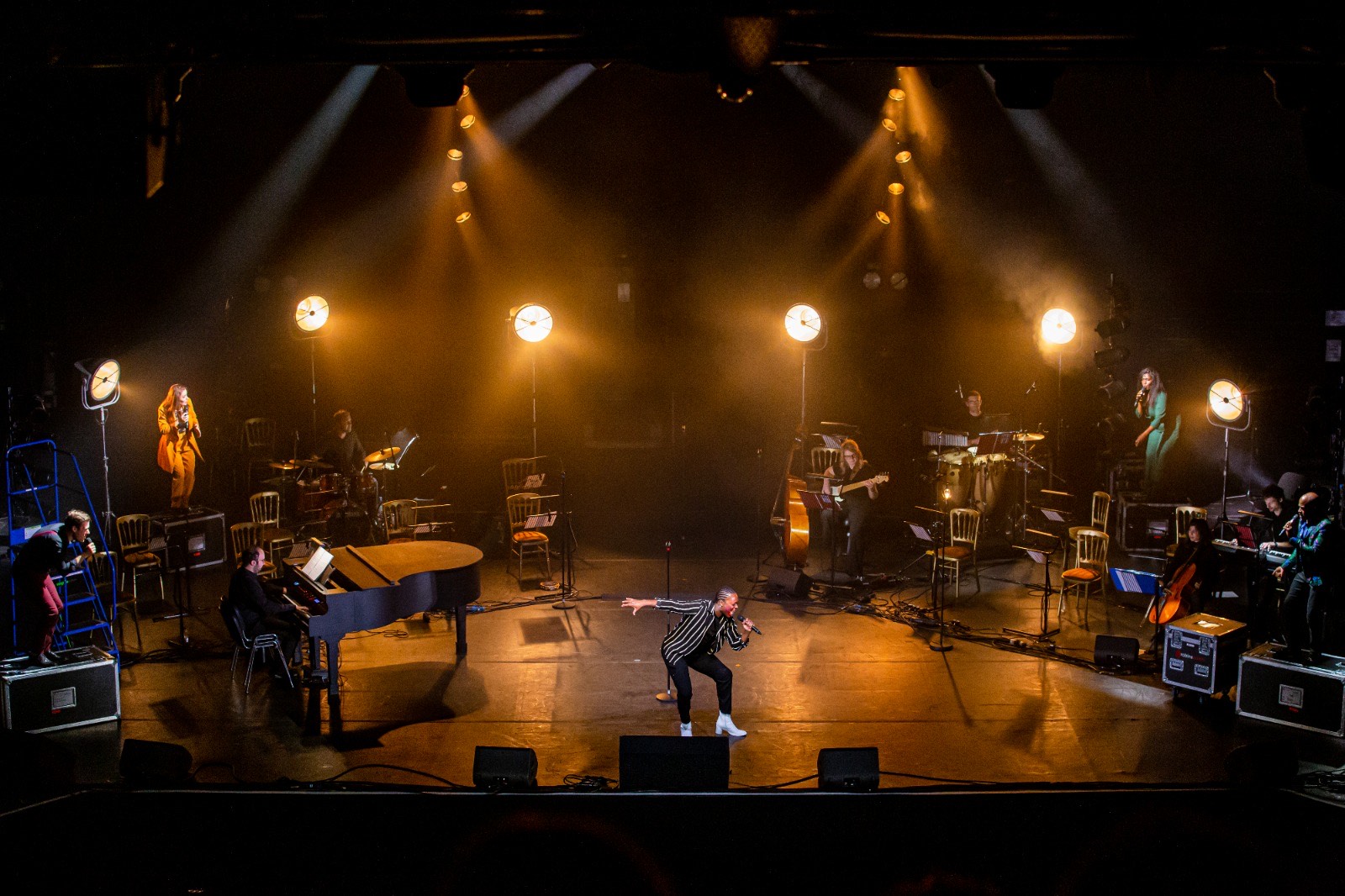 According to Joshua Robins, owner of events technology solutions provider Robins Audio, which provided all of the sound equipment for the show, most of those in attendance appeared to adjust seamlessly to the conditions.

“Over the whole weekend at the Palladium, everyone involved continually mentioned how safe and secure they felt with the measures put in place by the venue,” Robins told Audio Media International. “There were one-way systems put in place through the backstage and FOH areas, antibacterial door handles installed throughout, and a state-of-the-art thermal imaging camera system on entry to the venue, not your average plastic temperature sensor you get in most shops and restaurants.

“We had to keep our face masks on at all times and this was reiterated when the audience entered. Performers were obviously exempt from wearing face masks whilst on stage but were always wearing them whenever we stopped tech or they were off-stage. Mics were also stored in separate boxes and not shared at all.”

As for the atmosphere generated by the audience, Robins described the response as ‘emotional and overwhelming’, with spirits unincumbered by the restrictions.

“Working on an event of this scale during COVID was an amazing experience,” he continued.  “The feeling of watching a live gig with an audience is one that many of us had forgotten. The atmosphere from the audience was absolutely phenomenal, with such an emotional response from a thousand people who have clearly been missing the magic of live theatre for far too long. For one of our shows, we experienced a four-minute standing ovation when the conductor walked on stage before the show had even started… such an overwhelming experience.”

Also in attendance for the show was theatre director and actor, co-founder of Curtain Call (a marketplace for freelancers in the events industry) and host of Curtain Call Theatre Podcast, John Schwab, who described the atmosphere in the room in similar terms.

“Once inside, it felt like I was putting on the most comfortable pair of shoes,” Schwab told AMI. “I have sat in the audience of the Palladium on many occasions as an audience member. I have also been backstage a few times covering shows for my company Curtain Call. My wife has been there so many times as part of production teams when ITV film there. She felt very strange and not safe to begin with. Because of the number of people there. It just felt so strange to be surrounded by…strangers.

“The mood, however, was electric. And that started before we even reached the front doors of the Palladium. There was a tremendous buzz outside that was only amplified once in the space. That gentle hum of an audience always gets me in the mood to watch a show, and I imagine I wasn’t the only on in the room that goes for.” 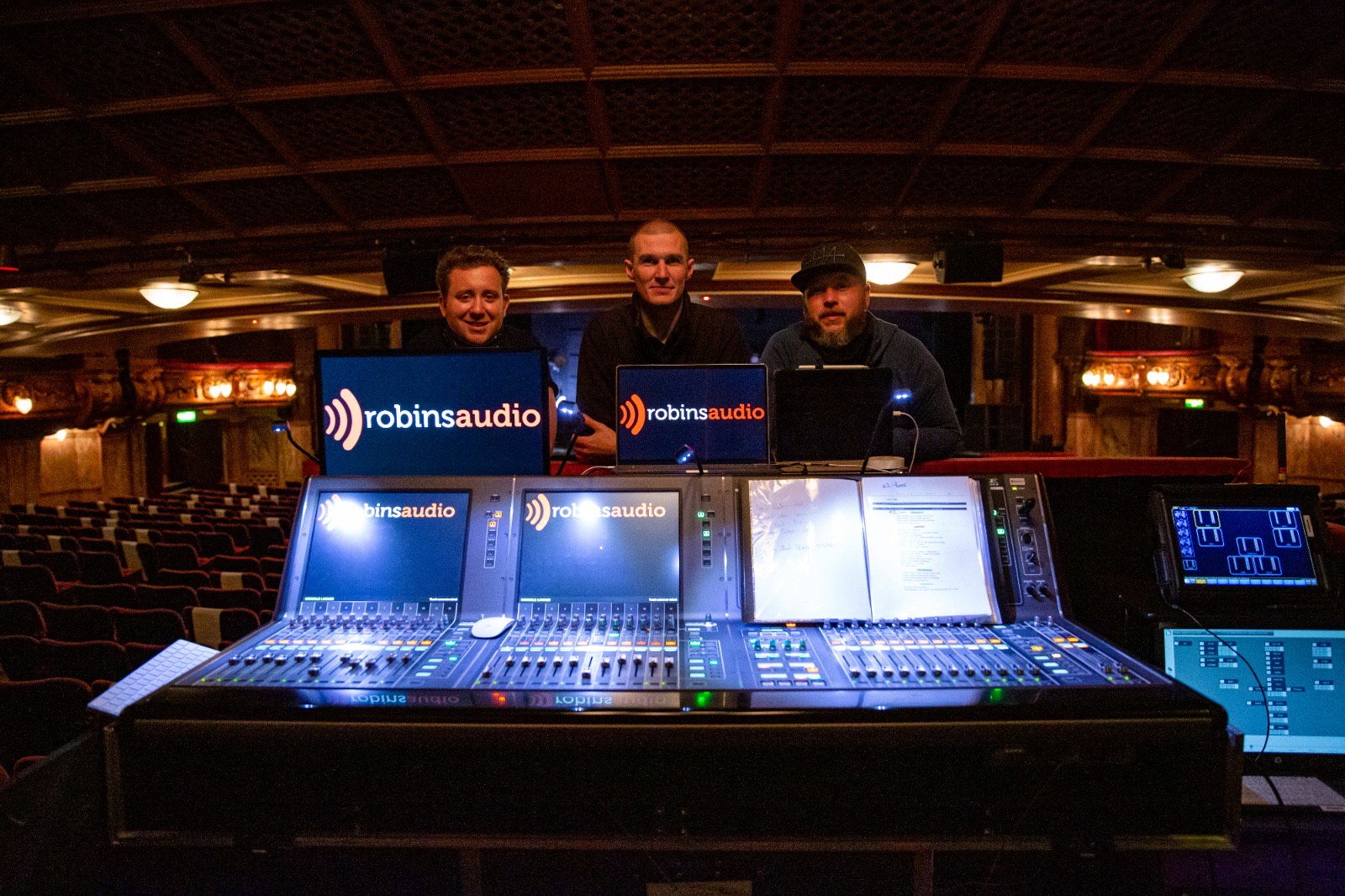 For the past few years, Robins Audio and its head of live music and touring events, Jonny Dickie, has been working closely with show production company Lambert Jackson. Towards the end of 2019, Robins Audio provided sound design and hire for Lambert Jackson’s production of Doctor Zhivago at Cadogan Hall, as well as its live stream events from the Phoenix Arts Club throughout lockdown. Both Joshua Robins and Dickie shared the role of sound designer on Songs For A New World.

When it came to specifying the show’s audio element, Robins was tasked with complementing a permanently installed L-Acoustics Kara system (courtesy of SSE) with additional L-Acoustics components – something that Robins describes as being especially helpful given the rapid turnaround required to get what is already a complex show up and running.

“Songs For A New World is quite unique as it’s staged half the time like a concert, Robins explained. “As such, the cast spend half their time on headsets and half their time on handhelds, so it was a challenge to keep the sound fairly uniform throughout the show whilst also retaining a good level of gain before feedback. This was rather difficult when using the headsets on an already loud stage. We also had a really short timeframe to get this show up and running; we only had a couple of hours on the Saturday to ensure the band and cast were sound-checked and every scene was programmed. Being able to integrate into with the in-house system not only made our lives so much easier on the install, it also made budgets manageable during COVID, a problem many producers are facing.

“Utilising an already installed system at any venue is obviously more limiting creatively as a sound designer. However, the system installed in the Palladium is very well designed and well-tuned, which made our lives a lot easier within our short tech time. We had a system technician supplied by SSE for the entire weekend, who was extremely helpful. If we were to bring another longer running show into the Palladium, I would definitely utilise the in-house rig again, but supplement it with extra boxes for creativity.”